Fife-based Kingsbarns Distillery has launched 2 Year Old Spirit Drink, the first expression from the producer to be aged in oak casks and released as it waits for its Scotch whisky comes of age. 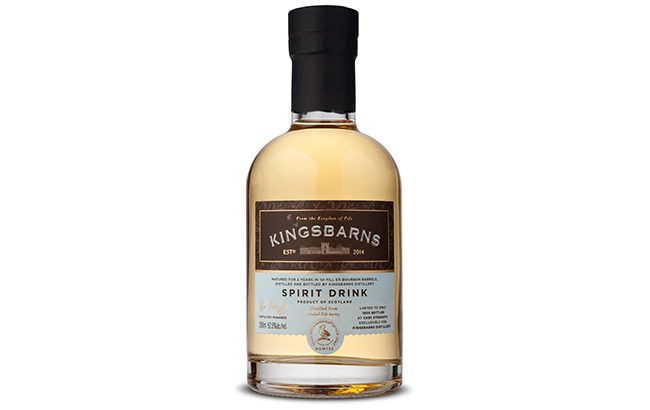 The 200ml bottling comprises liquid from two first-fill ex-Bourbon barrels that have matured single malt for over two years. A non-chill-filtered release, the 2yo expression has been bottled at a natural cask strength of 62.8% abv. The distillery plans to bottle the first official Kingsbarns single malt Scotch as a Founders Reserve, especially for its Founders Club members, in 2018. Kingsbarns previously released Kingsbarns Spirit Drink in 2015 at the ‘filling strength’ of 63.5% abv. “We are delighted to announce the limited release of our 2-year-old spirit which can be purchased exclusively here at the distillery,” said Peter Holroyd, distillery manager. “It has a sweet, floral nose and on the palate I get ginger biscuits with a slightly dry finish. It’s very exciting to see how our spirit is progressing so far, and with only one more year to go until we can call what we produce Scotch whisky, the team here at Kingsbarns are all looking forward to releasing our first malt in 2018.” William Wemyss, representing the family behind the Kingsbarns Distillery, added: “When establishing Kingsbarns distillery great effort was dedicated to acquiring the finest casks for maturing our precious spirit and it is fantastic to see how in just two years, the spirit had developed and transformed. “Expectation and demand for this exclusive one off bottling will be intense given the continuing popularity of the Kingsbarns new make spirit and the whisky enthusiast's ever thirsty curiosity regarding the progress of this new Lowland malt.” Kingsbarns Distillery’s 2 Year Old Spirit Drink is available now from the Kingsbarns Visitor Centre, with telephone orders open to Founders’ Club members in the UK and Europe. 1,800 200ml bottles have been released for purchase, with sales limited to one per person.