Every month we will delve back through our archives and note the most innovative, trendy and sometimes wacky launches by spirit producers around the world. August's selection focused on premium  and super premium releases as consumers demand more value for their money and one-off luxury experiences. But in September we witnessed a raft of heritage and history-inspired brands launch, from London Dry Gin named after a famous area of the UK's capital, to Prohibition-style white grain spirit - an ingredient lusted after by bartenders eager to create cocktails with a past. We even saw the launch of a 50 year-old Scotch released to celebrate the 50th anniversary of its master distillers' time at the company. Take a flick through our pick of the top launches of the last month, but if you feel we’ve missed anything out, feel free to let us know at info@thespiritsbusiness.com. 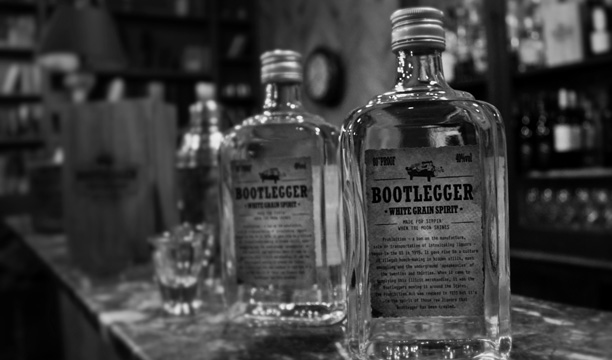 Bootlegger white spirit Halewood International’s Prohibition-style white spirit (40% abv) launched in the UK in September at the London Boutique Bar Show, and is targeting a younger, ‘pre-whisky’ audience. Halewood claims Bootlegger's blend of English and French wheat gives it a smooth oak and vanilla taste with a ‘lingering grain-filled finish’, and is designed for sipping. Its signature cocktail is the Capone, made with Bootlegger, Grand Marnier, bitters and Champagne. Read more about Bootlegger here. 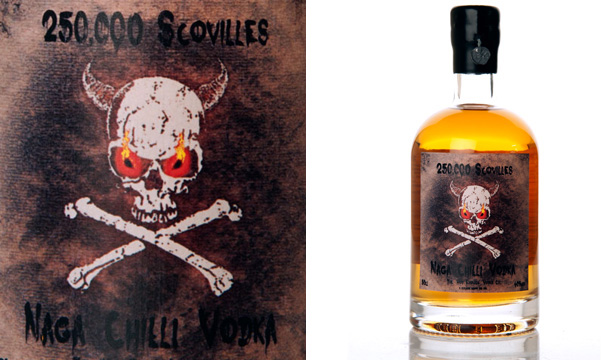 250,000 Scovilles Naga Jolokia Vodka Not happy with the devastation to taste buds everywhere caused by the original 100,000 Scovilles vodka, the Masters of Malt have gone a step further with a vodka that is over twice as fiery as the last. Its producers claim to have made the world's hottest chilli vodka with this one, which has been infused with whole Naga Jolokia chillies for just weeks. Sample with care – even producers Masters of Malt advise consumers NOT to buy it… Read more about 250,000 Scovilles Vodka here. 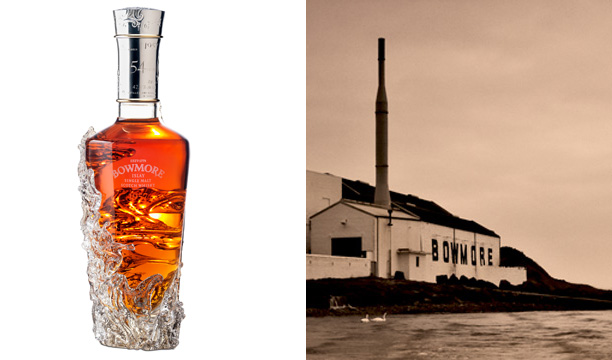 Bowmore 1957 - 54 Year Old Bowmore’s 54 year old expression, bottled only in 2011, is thought to be the rarest Islay in existence. Reflecting this, the first two of the 12 bottles produced will be auctioned off for charity, with the reserve starting at £100,000. If you can’t make the auction, you can still bag yourself one of the platinum-flecked bottles containing the whisky described as “nothing short of brilliance in a glass” for a price close to the auction reserve. Read more about Bowmore 1957 - 54 Years Old here. 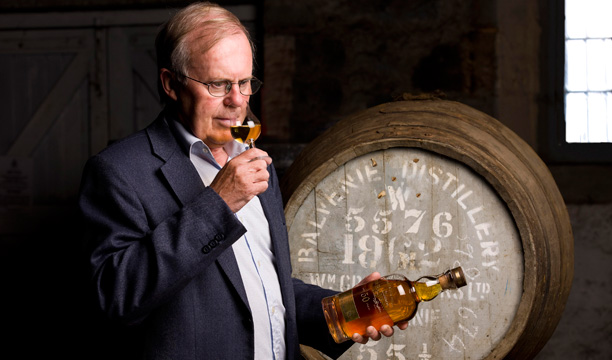 The Balvenie Fifty This limited edition variant celebrates the house master distiller, David Stewart’s 50th anniversary with the Speyside company. In 1962, the year he joined the company, Stewart laid down a batch of The Balvenie single malt whisky in a rare European oak sherry hogshead. “It’s true to say I have a dream job and I’ve been privileged to taste a lot of wonderful whisky in my time, but it’s a great delight to discover how after half a century this unique cask has turned out a truly special single malt.,” he said. Only 88 bottles of The Balvenie Fifty have been produced, each with a price tag of £20,000. Read more about The Balvenie Fifty here. 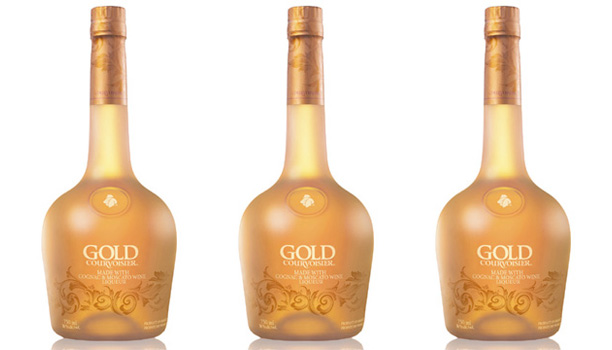 Courvoisier Gold This Courvoisier/Moscato blend comes 15 months after the success of the Courvoisier Rose launch in the US in June last year. The 18% abv (36-proof) spirit combines French Moscato grapes with Courvoisier’s house Cognac in the house's signature Josephine bottle, providing what the brand calls a ‘refreshing and accessible experience’. It is available across the US with an RRP of $24.99 for a 75cl bottle. Read more about Courvoisier Gold here. 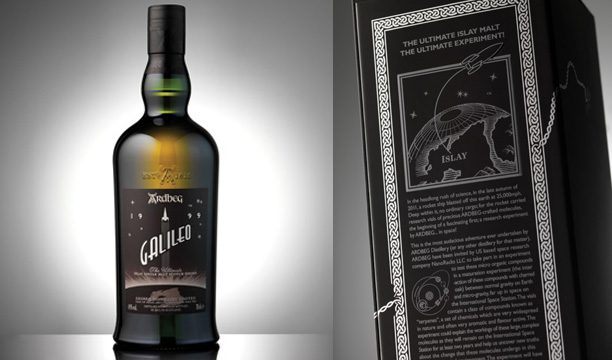 Ardbeg Galileo This ‘earthly tribute’ to a whisky experiment currently going on several hundred miles above our head a non-chill filtered blend of various Ardbeg casks laid down in 1999, including first and second fill bourbon casks and ex-Marsala wine casks from Sicily, which impart fruity aromas to the whisky. It can be bought from specialist whisky shops for £69.99. “There are only a few thousand cases available and as ever with Ardbeg we expect demand to be brisk,” said Hamish Torrie from Ardbeg. Read more about Ardbeg Galileo here. 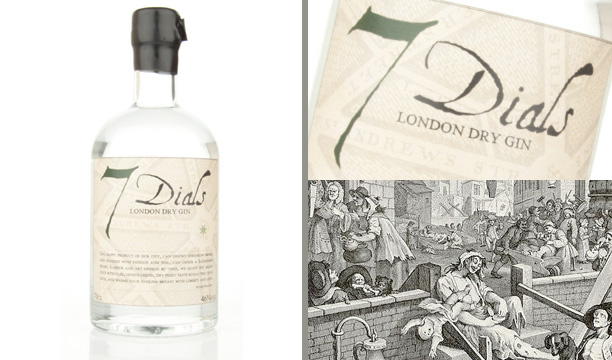 7 Dials Gin This latest Masters of Malt creation is a cold-distillation gin which is named after famous London location 7 Dials which in the 19th century was associated with “chronic want” and “vicious”, “semi-criminal” behaviour (as depicted by William Hogarth in "Gin Lane", 1751, above right). The gin, which is described as big and spicy, harks back to then, the heyday of full-flavoured, spice-fuelled spirits. 7 Dials is flavoured with 7 different botanicals, including the traditional gin base of juniper, as well as a mix of coriander, angelica, marshmallow root, clementine peel, cardamom and almond. It is available exclusively from Master of Malt for £39.95. 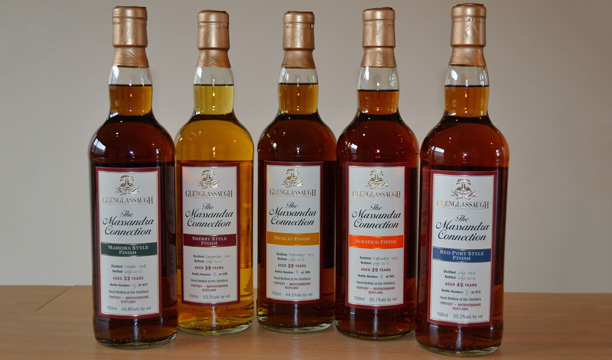 Glenglassaugh Massandra Connection This limited edition selection of five whiskies is the fruit of Glenglassaugh’s partnership with the Crimean winery, Massandra. There are only 1349 bottles produced from the five casks used to create the selection. They are Aleatico Finish, Sherry Style Finish, Muscat Finish, Red Port Style Finish and Madeira Style Finish, have their own characteristics in flavour and palate, and are of various ages. Prices range from £350 to £690 for the 45 year old Red Port Style whisky. “While using ex-wine or sherry casks to finish whisky is nothing new, we believe that this is the first time that a distillery has been able to use Crimean wine casks in this process," said Stuart Nickerson, managing director of Glenglassaugh distillery. "Previously, the Massandra Winery would use their casks until physical exhaustion and this is the first time that they have allowed the casks to be used outside of the winery." The range is available in selected markets around the world. 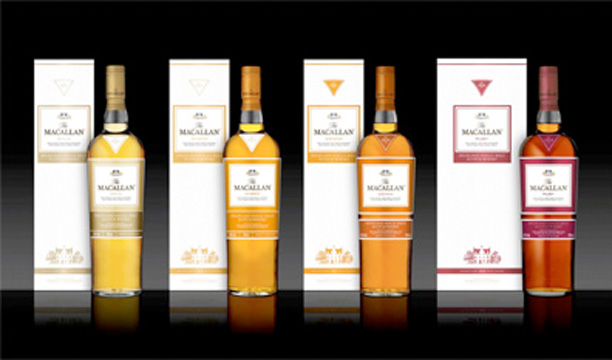 Macallan Gold The Macallan 1824 Series which focuses on colour, rather than age, has released the first of its four expressions - Gold. It is the palest and least expensive in the range, retailing for £35. The three remaining variants will be launched over the next few months. Amber, the next to be released, costs £45, Sienna £75, and Ruby, the premium expression, will cost £120. The whiskies will also replace the 10 year-old through to 17 year-old expressions, with the 18 year-old now the youngest Macallan whisky available with an age statement. Read more about The Macallan 1824 Series here.