That Boutique-y Gin Company reaches for the stars, everything's just "peachy" for Jack Daniel's and Captain Morgan goes "loco" – we round-up of 10 of the best product launches from March 2017. 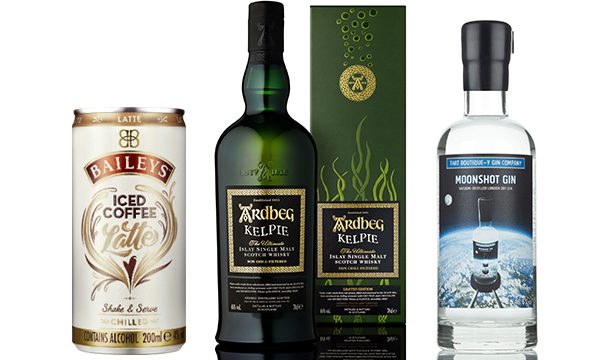 Innovation was top of the agenda in March 2017, with a number of big-name brands releasing new liquid in surprising forms. Take Bailey's – the world-renowned Irish cream moved into the RTD category, tapping into a love for iced coffee with Mocha and Latte variants, while Pernod Ricard fused haute cuisine with skincare tech for the launch of new brand L'Orbe, which sees encapsulated caviar bottled with vodka. High-end Scotch whiskies also took the front seat, from the "oldest and rarest" Glenmorangie ever released, to a 50-year-old Tamdhu bottled to mark the distillery's 120th anniversary. Those on the quest for something out of this world won't be disappointed either – last month, That Boutique-y Gin Company unveiled an expression created with moon rock from a lunar meteorite. Read on for a round-up of the top spirits launches in March 2017. Want to re-cap February's offer? Click here to take a look back. 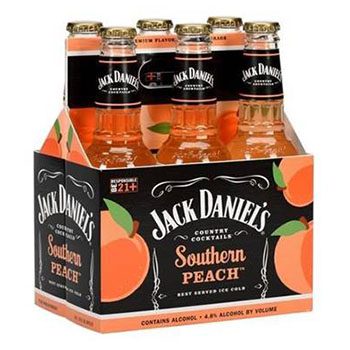 Jack Daniel's has rolled out a new expression in its Country Cocktails range, a variant called Southern Peach. The latest release joins other flavours including Watermelon Punch, Berry Punch and Lynchburg Lemonade, and is part of a collaboration with R&B singer K Michelle. K Michelle, a friend of the Jack Daniel's brand for some time, said: "Jack Daniel's is a brand with a rich history. Also being from Tennessee, I've always appreciated how JD falls in line with my southern values." 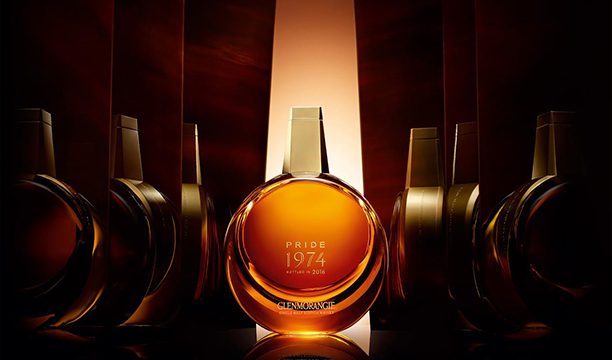 Glenmorangie has released its "oldest and rarest" expression to date:, Pride 1974. It is the third Scotch in the Glenmorangie Pride Collection, which showcases the LVMH-owned distillery's rarest malts via limited edition batch releases. Just 503 decanters of Pride 1974 have been released at an RRP of £7,200 (about US$9,000). The decanter itself is made from crystal, features gold and metallic detailing and is presented in a cherry wood box with a mirrored interior. To mark the release, a piece of music was written by pianist Aaron Diehl that "embodies the whisky's rare beauty". 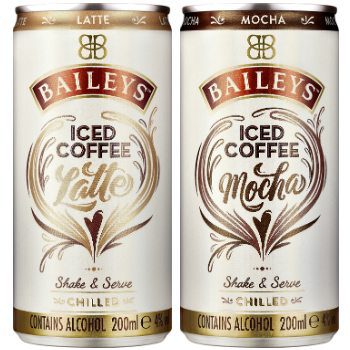 Diageo tapped into consumer demand for iced coffee with the launch of ready-to-drink Baileys Iced Coffee. The brand released to variants, Latte and Mocha, both of which are a blend of Robusta iced coffee, real milk and "an undisclosed spirit". The Mocha expression also includes real cocoa. The launch was supported by a "six-figure" marketing investment focusing on social, digital and other media. Promotions will run online, in cinemas, and the brand will also sponsor Made in Chelsea for its next three seasons. With 18 billion cups of coffee drunk in Great Britain each year, the approach look sure to be a winner. 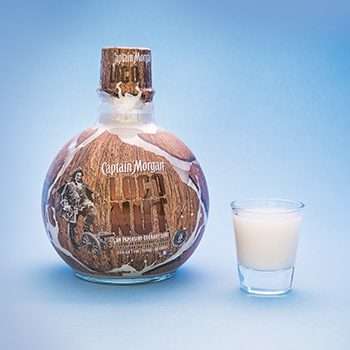 Following on from its Cannon Blast (rum that contained jalapeño pepper) and Jack-O'Blast (pumpkin-flavoured spiced rum), Captain Morgan launched LocoNut, a new coconut-flavoured rum liqueur in a bid to boost its presence in the shot market. In line with the other expressions in this range, LocoNut is presented in a round bottle designed to look like a coconut. It also has a "scratch and sniff" label, which gives off the aroma of coconut. LocoNut is gluten-free and is "best enjoyed as a chilled shot". The product also comes with a list of serving suggestions which include cocktails and mixed shots.

To mark the 120th anniversary of its Speyside single malt Scotch distillery Tamdhu, Ian Macleod Distillers has launched a 50-year-old single cask, the brand's "oldest" bottling to date. Just 100 bottles have been released, with each carrying a £16,000 (about US$20,000) price tag. Tamdhu 50YO is said to offer notes of cloves, espresso, baked apples and liquorice on the palate, with a finish of cocoa, maple syrup, ginger and walnuts. Leonard Russell, Ian Macleod Distillers managing director, said: "There was a time, before we bought and reopened Tamdhu, when some thought it was gone forever. This cask, which may never have been released had the distillery remained closed, can be now enjoyed and savoured, and that is something we want to celebrate." 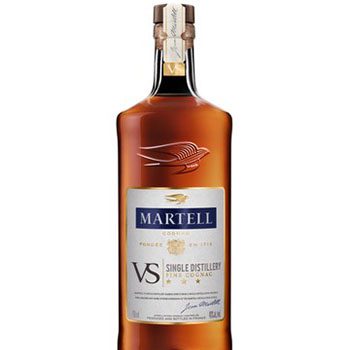 Pernod Ricard-owned Martell released a new "richer" VS expression containing eaux-de-vie produced solely from one distillery. The new offering brings back the shape of the classic "montre" Cognac bottle, with a cork and label both stamped with the signature of Martell House founder, Jean Martell. The producer recommends the Cognac be served neat, or in long cocktails, and it is said to pair well with red berries and citrus fruits. Martell VS Single Distillery will be available in the UK with a suggested RRP of US$34.99.

Go to infinity and beyond with Moonshot Gin, a new expression from That Boutique-y Gin Company. Botanicals include juniper, coriander, cubeb pepper, lemon peel, camomile flowers, cardamom, orange peel, cinnamon, liquorice root and angelica – but what sets it apart is that these ingredients were fired into the stratosphere where, at 24km above the Earth's surface, they were "exposed to extremely low pressures". It also contains moon rock from a lunar meteorite. The first batch will comprise 1,000 50cl bottles which carry an RRP of £32.95 (about US$42). 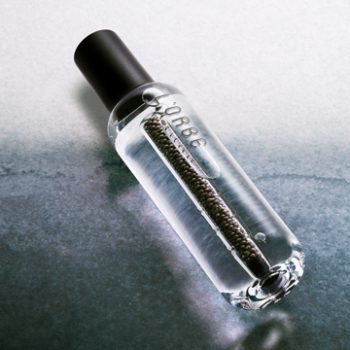 Pernod Ricard partnered with Capsum, a French cosmetics producer, to launch L'Orbe caviar-infused vodka last month. Using tech usually applied in skincare, the caviar is coated in a water-based film, which allows it to sit in the vodka without exploding. The sturgeon eggs are held in a narrow central column in the bottle which is pierced with six small holes. Pernod Richard aims to sell 100,000 bottles of L'Orbe by 2020, with each retailing at £175 (US$213). 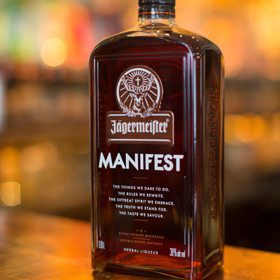 Jägermeister last month released Manifest, the "world's first" super-premium herbal liqueur. Based on the brand's original recipe of 56 herbs, spices and roots, it contains additional botanicals and uses five macerates instead of four to set it apart. The liquid offers notes of "rich oak, sweet aniseed and dried fruit", finishing hints of vanilla and subtle spices. It is presented in a clear bottle featuring the Jägermeister stag emblem. Manifest's travel retail guide price is €29.99 (US$32) per bottle. 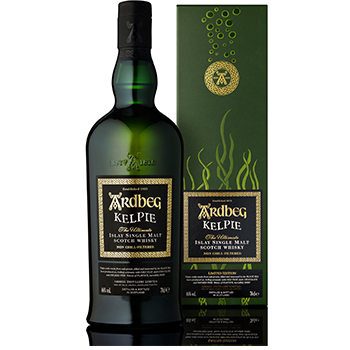 Islay single malt distillery Ardbeg released Kelpie last month as this year's expression to mark its Ardbeg Day. Matured in Black Sea oak, which the distillery says isn't often used in whisky-making due to the wood imparting "deep flavours", Kelpie, is named after the shape-shifting cryptid said to inhabit Scottish lochs and waterways. The Kelpie liquid is a blend of whiskies from the Black Sea oak casks and signature Ardbeg, which has matured in ex-Bourbon barrels. The combination is said to give the whisky "incredible depth". Nosing and tasting notes provided include oily peat, smoked fish, seaweed, dark chocolate, smoky bacon, black pepper, pine resin, clove oil, treacle toffee and black olives.