The Scotch Malt Whisky Society (SMWS) will release three single cask Islay expressions to mark the Islay Festival of Music and Malt, or Fèis Ìle, which gets under way later this month. 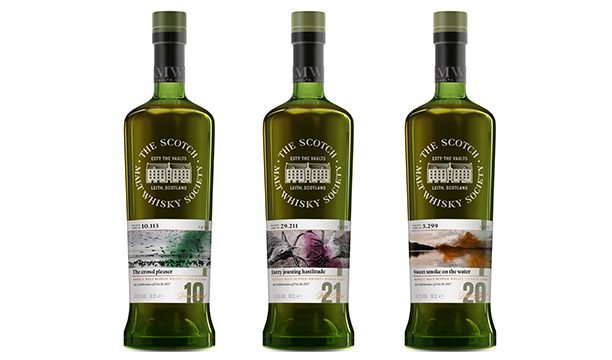 The three expressions fall within the independent bottler’s ‘Peated’ and ‘Heavily Peated’ flavour categories and, as all Society bottlings, are released at natural colour and cask strength. The Crowd Pleaser (10.113) is a 10-year-old whisky from a second-fill ex-Bourbon barrel. The heavily peated dram is said to be reminiscent of “old first aid kits and sweet hot smoked salmon”, and there will be 186 bottles available. Sweet Smoke on the Water (3.299) is 20 years old and from a second-fill French hogshead. The peated expression is said to offer notes of smoked duck and ribs with a sticky glaze, and 252 bottles are available for purchase. Completing the line-up is Jazzy Jousting Hastlitude (29.211), a 21-year-old first-fill American oak-matured whisky. The peated dram is reminiscent of “tarte tatin, treacle toffee, and herbal smoke”, with 228 bottles available. While the Society uses a distillery and cask numbering system and doesn’t disclose its sources, it is understood that expressions numbered 3 are from Bowmore, 10 represents Bunnahabhain and 29 is Laphroaig. All three bottlings will be available at the Society’s UK venues from 1 June, with those attending the Islay festival able to purchase from 26 May. In addition, the trio will also be stocked at the Society’s partner bars in France and Germany, which will host Fèis Ìle-themed whisky flights and hosting events to coincide with the festival. Branches in the US and Australia will also be hosting events tied in with Fèis Ìle. “The eyes of the whisky world will be focused on Islay for Fèis Ìle and we wanted to release some incredible single cask whiskies in honour of the event,” said Helen Stewart, senior brand manager for the Society. “These three special whiskies reflect the variety of flavours within our Peated and Heavily Peated flavour profiles and are sure to appeal to fans of peaty Islay whisky.” Fèis Ìle takes place on Islay from 26 May to 3 June. During the festival, SMWS will host a number of Flavour of Islay events at Islay House in Bridgend, including whisky and food-pairing activities. The Fèis Ìle trio are presented in SMWS's new packaging, the result of the first bottle redesign in 10 years which was unveiled in February 2017.