Rémy Cointreau-owned Greek spirit Metaxa has revamped the packaging for its Private Reserve expression to mark the 25th anniversary of the product's launch. 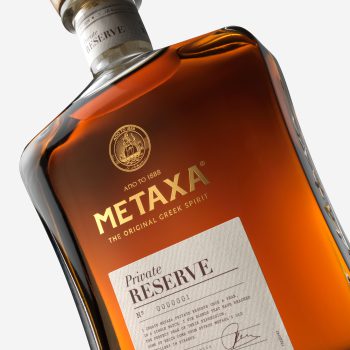 Constantinos Raptis, the fifth Metaxa master blender, first released own-blend Metaxa Private Reserve in 1992. He developed the expression to celebrate the House and the four masters that had come before him, and to reflect his own appreciation of the company's philosophy and values. "I create Metaxa Private Reserve once a year, in a single batch, with blends that have reached the perfect peak of their expression,"Raptis said. After he selects the liquid, each annual run is released as a "numbered, limited edition of individuality and elegance". For 2017, the expression will be presented in a new-look decanter encased in a gift box, with the label bearing Raptis's signature. According to the brand, Metaxa Private Reserve offers notes of oak, dried flowers, old honey, chocolate and coffee on the nose, and tobacco, orange peel and raisins on the palate. The finish is said to impart a long aftertaste of dried fruit. Metaxa Private Reserve is bottled at 40% abv, and price has not yet been disclosed. Last year, Metaxa released its 12 Stars expression, at the same time as announcing Swiss explorer Mike Horn as its brand ambassador.
Back to Uncorked
ABOUT THE SHOP