A UK micro-distillery has launched the first British-made version of grappa onto the market, writes Lia Sanders. 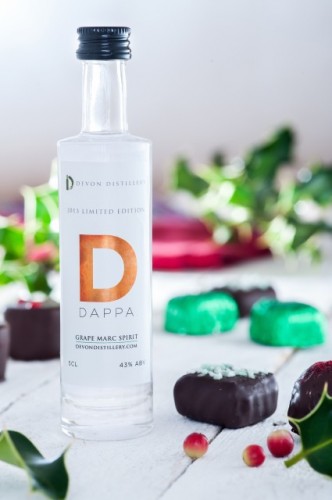 Devon Distillery has created Dappa, using the same techniques as the Italian digestif. Skins of English red grapes are distilled by hand in a copper pot to create the 43% pomace brandy. Cosmo Caddy, founder of the distillery, said: “It’s exciting to be the first producer of grappa in the UK. The response has been fantastic, with extremely positive comments about both its look and originality.” Caddy’s grandfather planted Sharpham Vineyard in Devon the same year that he was born. These same vines are now providing grape skins that are distilled to make the drink. The first vintage of Dappa was finished in October 2013 using mainly Pinot Noir and Rondo grape skins, as well as small quantities of Dornfelder and Regent. Devon Distillery describe the drink as having “clean, crisp and grassy flavours, with hints of berries and earthy tones”, recommending that it is best served with coffee or dark chocolate. Dappa has been shortlisted for the 2014 Food & Drink Devon ‘Best Packaging’ and ‘Best Product’ Awards. 350ml bottles of the 2013 vintage are sold at £30.
Back to Uncorked
ABOUT THE SHOP