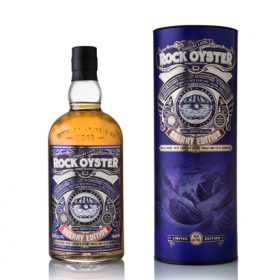 Finished in Spanish Sherry butts, the liquid is bottled at 46.8% abv and is said to "capture the spirit of Island whisky in all its salty, citrus, sweetly peated and peppery glory, with a rich, sherried warmth at its core". To mark the launch, Douglas Laing has lined up a series of National Rock Oyster Day dinners across the UK. Guests will sample the core product along with the new Sherry edition and recently-launched Rock Oyster 18 Years Old as part of seafood-pairing experience at various UK venues. Branded point of sale resources are available to support the activation, including atomisers and tea towels. "Rock Oyster Sherry Edition is a lip-smacking success story of the magic that can happen when sweet meets peat,' said Fred Laing, managing director and second generation in the family business. "Little more than two years since we launched the Rock Oyster brand, we’re thrilled to now be presenting an entire range to a thirsty audience of maritime-Malt lovers on National Rock Oyster Day. Shuck it!" Free from colouring and chill-filtration, the Rock Oyster range is available to purchase at specialist Whisky retailers globally.
Back to Uncorked
ABOUT THE SHOP